Close
Ask a Question
Home/Questions/Find the magnitude of the angular acceleration. Please and thank you. The seesaw is pivoted in the middle,...
Next
Answered

Find the magnitude of the angular acceleration. Please and thank you. The seesaw is pivoted in the middle,…

To understand and apply the formula τ= Iα to rigid objects rotating about a fixed axis.

To find the acceleration a of a particle of mass m, we use Newton’s second law. Fnet =ma, where Fnet is the net force acting on the particle.

To find the angular acceleration a of a rigid object rotating about a fixed axis, we can use a similar formula: Tnet = Ia, where Tnet=∑T is the net torque acting on the object and I is its moment of inertia.

In this problem, you will practice applying this formula to several situations involving angular acceleration. In all of these situations, two objects of masses mi and ma are attached to a seesaw. The seesaw is made of a bar that has length I and is pivoted so that it is free to rotate in the vertical plane without friction.

You are to find the angular acceleration of the seesaw when it is set in motion from the horizontal position. In all cases, assume that m1 > m2, and that counterclockwise is considered the positive rotational direction. 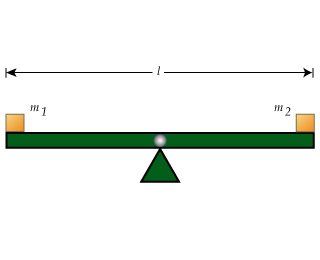 The seesaw is pivoted in the middle, and the mass of the swing bar is negligible.

Find the angular acceleration a of the seesaw.

Now consider a similar situation, except that now the swing bar itself has mass mbar .

Find the angular acceleration a of the seesaw.

This time, the swing bar of mass mbar is pivoted at a different point, as shown in the figure.

Find the magnitude of the angular acceleration α of the swing bar. Be sure to use the absolute value function in your answer, since no comparison of m1, m2, and mbar has been made.

♦ Relevant knowledge
The term “torque” refers to the force that may bring about the rotation of an object or angular acceleration for an object that is situated around an the axis of rotation. It is a vector number the magnitude of torque can be calculated by finding the result of the force magnitude and the distance perpendicular to the location that the force is applied and the axis of rotation. The direction of torque is determined by using the rule of right hand.
accelerationangulartorque
Share

You must login to add an answer.